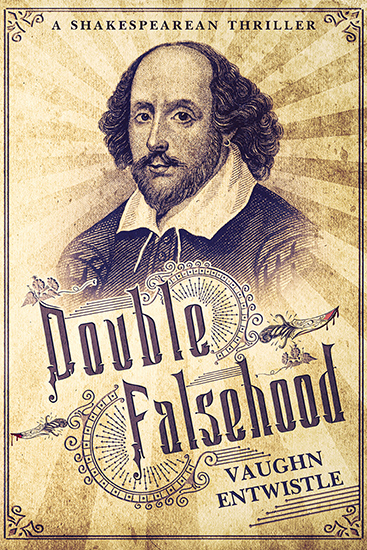 Double Falsehood is an historical thriller about a long-lost Shakespeare play. The story unfolds through dual narratives that take place in the same physical location (the White Hart Inn in Wiltshire, England) although separated in time by 400 years.

In the hot summer of 1597, the London playhouses are nailed shut after a seditious play penned by Ben Jonson and Thomas Nash lampoons the Queen and her Privy Council. Barred from performing in their own theatre, William Shakespeare and the Lord Chamberlain’s Men are forced to quit London for a tour of the provinces. But as they trudge the Great West Road toward Marlborough, the troupe stumbles upon the body of a murdered nobleman. The terrified players flee the scene only to be wrongly arrested for the crime by pursuivants (agents of Elizabeth’s secret police). The arrival of the queen on a Royal Progress wins them a temporary reprieve, but Shakespeare is forced to act as spy within the royal court. He soon becomes embroiled in a dalliance with the wife of a powerful nobleman and uncovers a papist plot to assassinate Elizabeth. Caught between pursuivants and Catholic conspirators, Shakespeare must use all his powers as dramatist to craft a play (Double Falsehood) that unmasks the plot before the murderers can strike.

In modern times, Harvey Braithwaite is the hapless landlord of the White Hart Inn, a lacklustre Tudor inn on the outskirts of Marlborough. Still smarting from a rancorous divorce, Harvey’s problems are compounded by his failing business, an unsympathetic bank manager, and an insubordinate barman. His luck changes when his inn hosts a clique of academics attending a Shakespeare conference at Wexcombe House, the nearby Tudor manor. When the blundering Harvey inadvertently falls through a hidden trap door in the pub’s cellar, he makes the discovery of a lifetime: an original manuscript of Double Falsehood, written in the Bard’s own hand. But, Harvey’s troubles soon multiply, as he begins to receive death threats. Besieged by the Press, some shady criminal types he has fallen in with, and the enraged academics, it seems doubtful that Harvey will live long enough to cash the huge novelty cheque he dreams of receiving for the sale of Double Falsehood.

“Characterizations are penetrating: Queen Elizabeth is earthy; Shakespeare’s players are bawdy. Dialogue and scenes are true to character: Braithwaite is witty and sharp-tongued; the ghostly figure is heartbreaking in silence. Rogues in past and present time spare foes little mercy with their trenchant and colorful epithets. God’s blood, ‘tis a hoot, forsooth.”
—Historical Novel Society

“Once again Vaughn Entwistle has given me a lot of enjoyment, there’s a good balance of darkness and light in a well-structured pacy tale which all in all leaves me to conclude he may have written his finest novel yet.”
—Revues Reviews