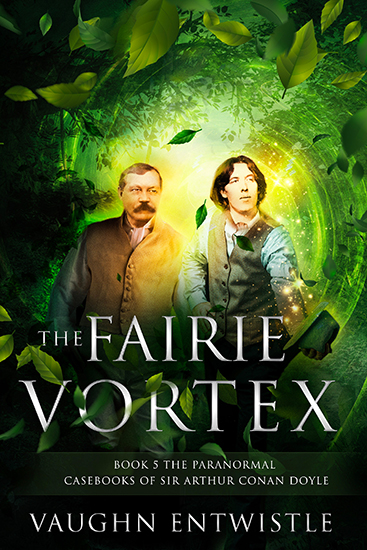 When Oscar Wilde answers an urgent summons to the British Museum Reading Room, he finds his friend, Arthur Conan Doyle, in a state of profound agitation.

The Scots author has discovered a mysterious Casebook #5 entitled: The Faerie Vortex. The Casebook contains a highly fantastical story about a trip the two authors made to the seaside town of Darvington in response to a letter from a woman who claims her daughters had been abducted by faeries. Although the trip took place a year ago, neither man has any memory of the journey, although proof has been pasted into the Casebook in the form of cancelled train tickets, a photograph of a little girls’ picnic (complete with faery visitors), and even a time-yellowed map of the lost village of Wyrme-Hallow.

But most worrying of all is the front page clipping of the Darvington newspaper describing Wilde’s arrest for the suspected abduction and murder of the two young girls. As the horrified authors debate the need to revisit Darvington to unravel the mystery, the two are torn between the need to find out the truth but terrified that Oscar Wilde risks facing murder charges if they return. Plus, as Wilde himself vexingly points out, “How can we return to a place we’ve never been to?”