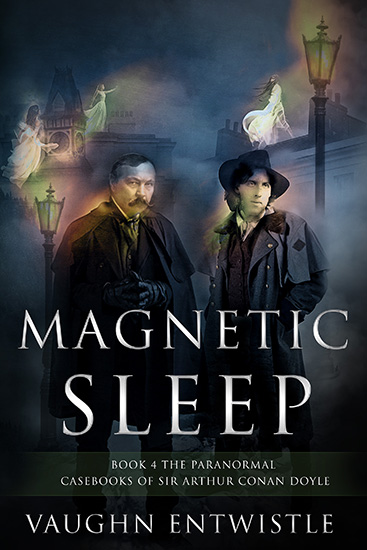 During a sultry London summer, the capitol is stricken by an outbreak of what newspapers soon dub “Sleepwalking Hysteria.” Strangely, nearly all the somnambulists are lissome young ladies from good homes. Stranger still, many of the sleepwalkers are committing crimes including burglary and arson, while others simply vanish into the night, never to be seen again.

Arthur Conan Doyle and Oscar Wilde are swept up in the case when they try to rescue one such somnambulist only to watch her plummet to her death. As eye witnesses they become embroiled in an investigation that involves white slavers, a music hall hypnotist with a magnetic attraction to the ladies, a bumbling Police Inspector named Crumpet, a muck-racking young reporter from the Illustrated Police News, and a suspicious foreigner—a psychiatrist who claims he can decipher the mysteries of the mind and knows the secrets of hypnosis.

The stakes are raised when the wives of both authors succumb to the sleepwalking hysteria and vanish on the same night. With the fate of both women in jeopardy, our Victorian super-sleuths race to solve the mystery before their loved ones become the next victims of “Sleepwalking Hysteria.”