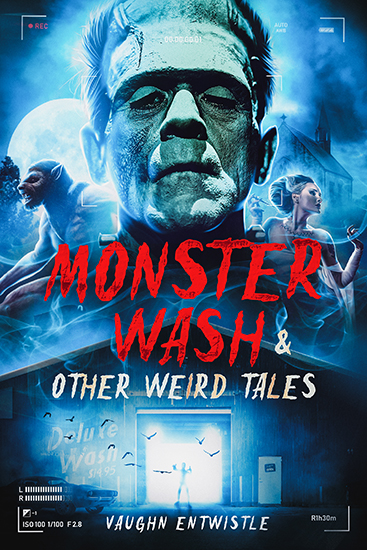 Weird Fiction from Vaughn Entwistle, acclaimed author of the ongong series, The Paranormal Casebooks of Sir Arthur Conan Doyle. Six insanely creative short stories and novellas that tape a “kick me” sign to Reality’s back and push it into a bowling alley filled with hopping, one-legged kangaroos.

Monster Wash: Ever wondered what happened to the old lineup of Universal Studios’ monsters from the 1930’s? Down on their luck since monster movies went out of vogue, Universal Studios’ most famous monsters—Frankenstein, the Wolfman, the Mummy—now work in a carwash in a bad part of East Hollywood. But when a young journalist stops in to interview the Car Wash manager (one Frank N. Stein), things go well until the flirtatious Bride of Frankenstein stops by after a Rodeo Drive shopping spree.

7-11: When a young college freshman works the graveyard shift at 7-11, he encounters a range of customers that range from the eccentric, to the vaguely menacing, to the dangerously psychotic.

LINES: A dreadful childhood memory is evoked every time a man sees a line of people queueing somewhere.

Neutral Buoyancy: When a cannery worker and a hustler team up to break a world record in depression-era New York—the longest duration for living underwater—the scheme goes horribly wrong with the building owner tries to evict them from the swimming pool they’ve rented.

Juggling in the Art Museum: When a juggler’s approach to the juggling craft clashes with the more avant-garde artists, it throws the annual juggling competition into chaos.

Bully the Bullies: Timmy Timkins is an English schoolboy relentlessly bullied by teachers and schoolmates alike. After seeing an advertisement in a comic book, Timmy mails away for a set of “Samson He-Man gauntlets.” Amazingly, the gauntlets actually work and Timmy’s new super-powers allow him to finally bully the bullies. But then Timmy takes things too far with a bullying teacher, his life changes in ways he could never have foreseen.