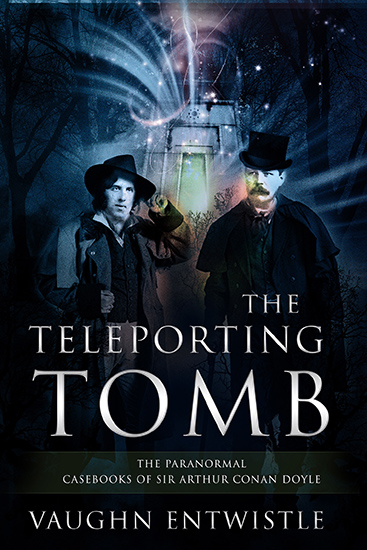 The Teleporting Tomb and Other Tales

Six scintillating tales from the files of the Paranormal Casebooks. Arthur Conan Doyle and Oscar Wilde.

The Teleporting Tomb: Conan Doyle and Oscar Wilde meet the bizarre Egyptologist Joseph Bonomi in the pre-dawn darkness of London’s Brompton Cemetery. They rendesvous at the at the Courtoy mausoleum, an Egyptian-themed tomb thot Bonomi claims is, in reality, a Victorian time machine or teleportation device. Although Wilde is highly skeptical and even Conan Doyle has his doubts, when the tomb door is finally opened, the incredible truth is revealed.

The Cabaret du Neánt: When Wilde and Conan Doyle visit the City of Lights, the lure of Parisian flesh pots such as the Folies Bergere and the Moulin Rouge seems irresistible. But instead, Wilde takes Conan Doyle to an alternative venue, the Cabaret du Neánt (The Cabaret of the Void) a nihilistic-themed night club that makes light of death with its morbid and ghoulish decor. Here they encounter two young lovers having a spat. But when the lover’s tiff turns violent, Conan Doyle and Wilde are swept up in a murky melodrama of love, murder, death . . . and the here-after.

The After-Life telephone: The genius scientist, Sir William Crookes summons our friends to a meeting at a derelict graveyard. However, the reason is not spiritual but purely monetary—the chance to invest in a new technology that promises to yield a fortune—the wireless telephone. However, the choice of the old cemetery takes an unexpected turn when the phone rings as the dead start calling.

Death Mask: Augustine Schneider, the world-famous phrenologist, invites Conan Doyle and Wilde to see his huge collection of death masks, the largest in the world. But when an errant champagne cork accidentally shatters a glass flask containing the final breath of an infamous serial killer, the evening turns into a struggle for survival.

Night Walking: Conan Doyle is staying at his club in the city of London when he suffers with a bout of insomnia. In hopes of tiring himself out, he decides upon a walk about the night time city. However, his evening stroll soon turns into an odyssey around a London that the night time has rendered strange, alien and filled with uncanny presences.

The Necropolis Railway: After attending a literary soiree, Conan Doyle and Wilde find themselves tramping the fog-bound streets of London in search of a ride home. However, the fog has bullied all the cab-drivers from the streets. The two friends think themselves lucky when they find a darkened railway station. Although the trains still run, they have mistakenly bought tickets for the Necropolis Railway, a service intended to carry the coffins of the recently deceased and their mourners. Both men fall asleep on the train ride only to awaken at a final destination neither wanted to visit.