Vaughn Entwistle is a British author who grew up in Northern England. After the family moved to the United States, he attended Oakland University in Michigan where he earned a Master’s Degree in English.

In the early nineties he moved to Seattle to work as a writer/editor. In his spare time he ran a successful gargoyle-sculpting company for ten years (yes, really!). Entwistle has published poetry and fiction in a number of small literary journals and won awards for screenplays and novels.

His novel The Angel of Highgate garnered outstanding reviews from the Historical Novel Society, Kirkus Reviews, Lit Reactor, Starburst Magazine, The Consulting Detective, Crime Review, Rising Shadows, and The Literary Review, amongst many others and was shortlisted for the 2015 Gothic Novel of the Year by the London-based Dracula Society. 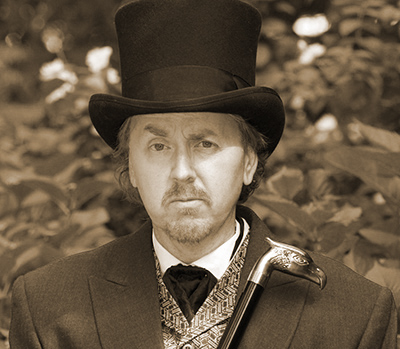 His Paranormal Casebooks series has been favourably reviewed by The British Fantasy Society, Historical Novel Society, the Book Blog, The Book Garden, Rising Shadow and many more.

You can follow Vaughn though his (very) occasional newsletter, and grab a free download one of the short stories from his latest book, The Teleporting Tomb; The Paranormal Casebooks of Sir Arthur Conan Doyle.